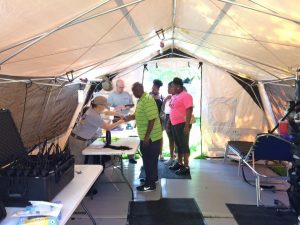 with Central Piedmont Community College’s EMS Program, Charlotte Fire Department, and MEDIC. The bi-annual event was held at the Charlotte Douglas International Airport in hopes of helping seventy-five future EMT graduates gain the hands-on experience of an MCI before having to assist in real-world situations.  Though the morning began with downpours of rain, the sun eventually started to shine on what would be an eventful afternoon.

The MHPC and Metrolina SMAT was asked to assist with volunteer management, which included registering and tracking the roughly fifty live patients that came to participate in the drill. Each volunteer was registered, assigned a patient number with background, given a colored armband, and photographed. This system better helped the MHPC staff and Metrolina SMAT volunteers keep track of other volunteers who were assigned to be patients.

Prior to and during the drill, the new acquired Deployed Logix tent was able to be set up and used as a registration 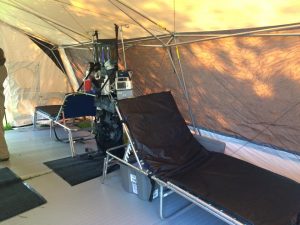 station and then later as a medical station, in case of any real injuries were to occur. During this event, the ease of use of the tent was discovered, not only by the MHPC staff, but by regional partners as well. In addition, the MCI Drill allowed MHPC staff to draft a deployment package for this resource. Since the event, the Deployed Logix tent has quickly become one of the most beneficial assets that the MHPC has acquired and will allow the organization to more promptly serve our regional partners.