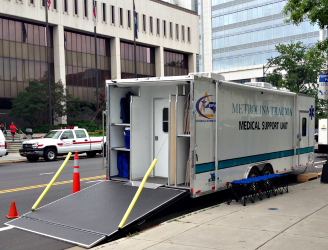 The Metrolina SMAT is one of eight similar teams across North Carolina that are a part of the State Medical Response System (SMRS). The SMRS is coordinated by the Office of Emergency Medical Services in an effort to improve the State’s ability to respond to emergent events that impact healthcare. This volunteer-based team responds to impacted areas within the Metrolina Region, the State of NC, or within the Southeastern United States.

The SMAT program saw it first major response during Hurricane Katrina. Members of the Metrolina SMAT, and several other SMAT II’s and SMAT III’s, deployed to Waveland, Mississippi, with Carolina’s Med-1 to provide a mobile field hospital for the area. Other SMAT II members from across NC responded to Charlotte to assist with the reception of people and patients who had been evacuated from the Gulf area. The lessons learned from this response showed that equipment for mobile treatment facilities was needed to ensure NC could better support itself in the face of a similar event since NC is very prone to hurricanes. The result was the purchase and distribution of 8 Western Shelter Mobile Response Trailer Systems that included a 53’ trailer, which came with 6 Gate Keeper 19×35 tent systems each. The tent systems could be set up individually, or connected with each other, and included provisions for power, light, and HVAC. The trailer was also designed to double as staff billeting and a command post, and also carries the generator for the tent system. The teams also received beds, medical equipment, and supplies to establish a 40-bed treatment facility. Over the years each team has made additions and adjustments to its system, equipment, and supplies to improve their capabilities.

In August 2011, the Metrolina SMAT participated in the response to Hurricane Irene by supporting the medical needs of evacuees in a shelter near Greenville, NC. The Metrolina SMAT also provided Health and Medical support to the Charlotte area during the 2012 Democratic National Convention.

The Metrolina SMAT has participated in or assisted with local events, exercises, and real-world events. In many cases this included providing personnel, logistics, or both. Some of these events include:

Anson County Health & Rehabilitation HVAC Deployment
The popup summer storms that have been affecting the Metrolina region are bound to bring their share of issues with them, including series of...
Read More

Carolina Rebellion SMAT Support
The beginning of May brought with it the first SMAT deployment of an already busy month. Members of the Metrolina SMAT and staff of...
Read More